DONATE
BE A MEMBER

Menu
DONATE
BE A MEMBER

Learn about the syndrome & its treatments

Understanding Smith-Lemli-Opitz syndrome (SLOS) is the start of improving the quality of life.

Learn about the biochemical discovery of Smith-Lemli-Opitz syndrome.

Discover what tests physicians use to determine if an individual has SLOS.

Read about the different characteristics associated with this syndrome.

Read about this autosomal recessive disorder and how it occurs.

Find out about common behaviors and attributes of SLOS individuals.

Become aware of the treatments available for this syndrome. 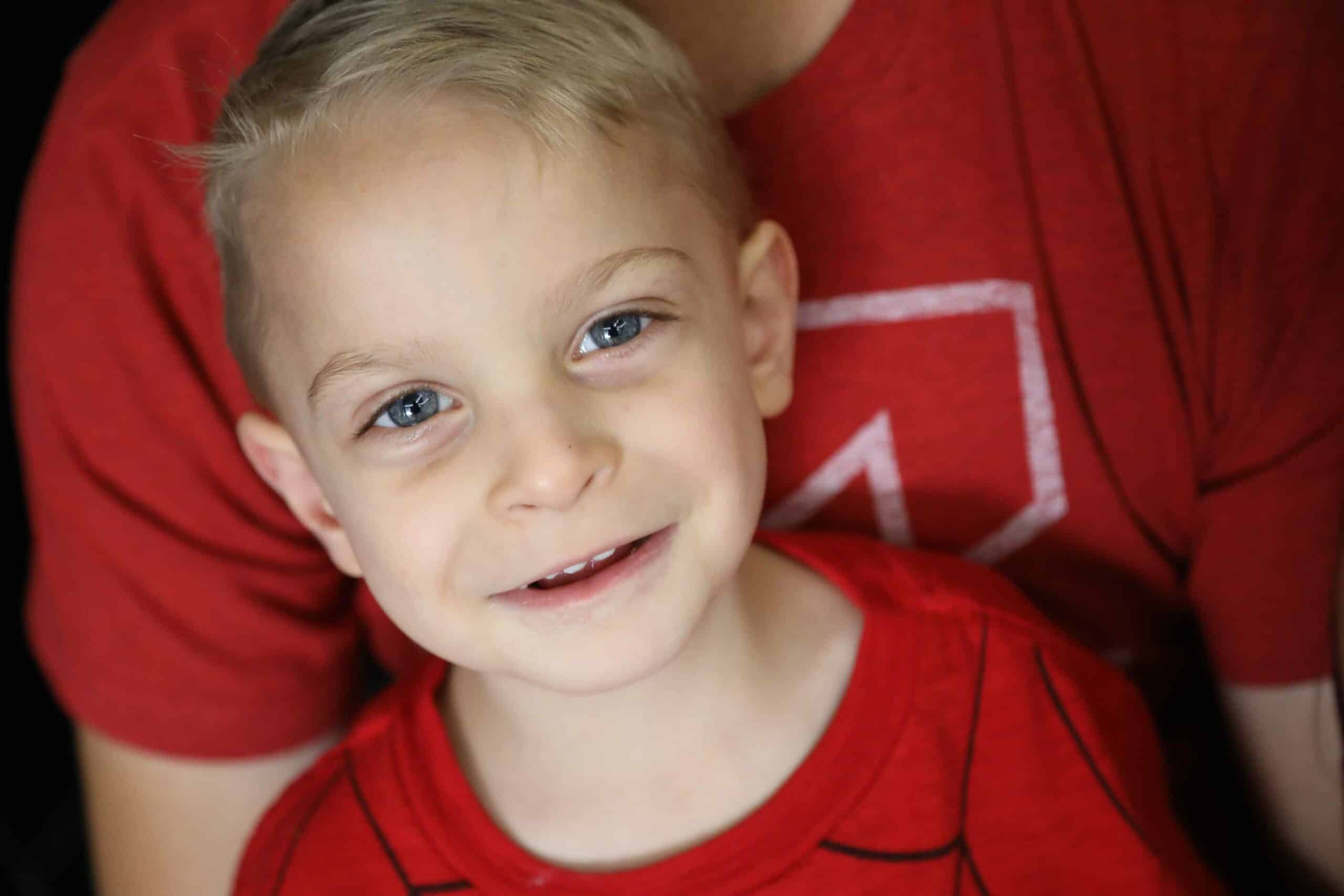 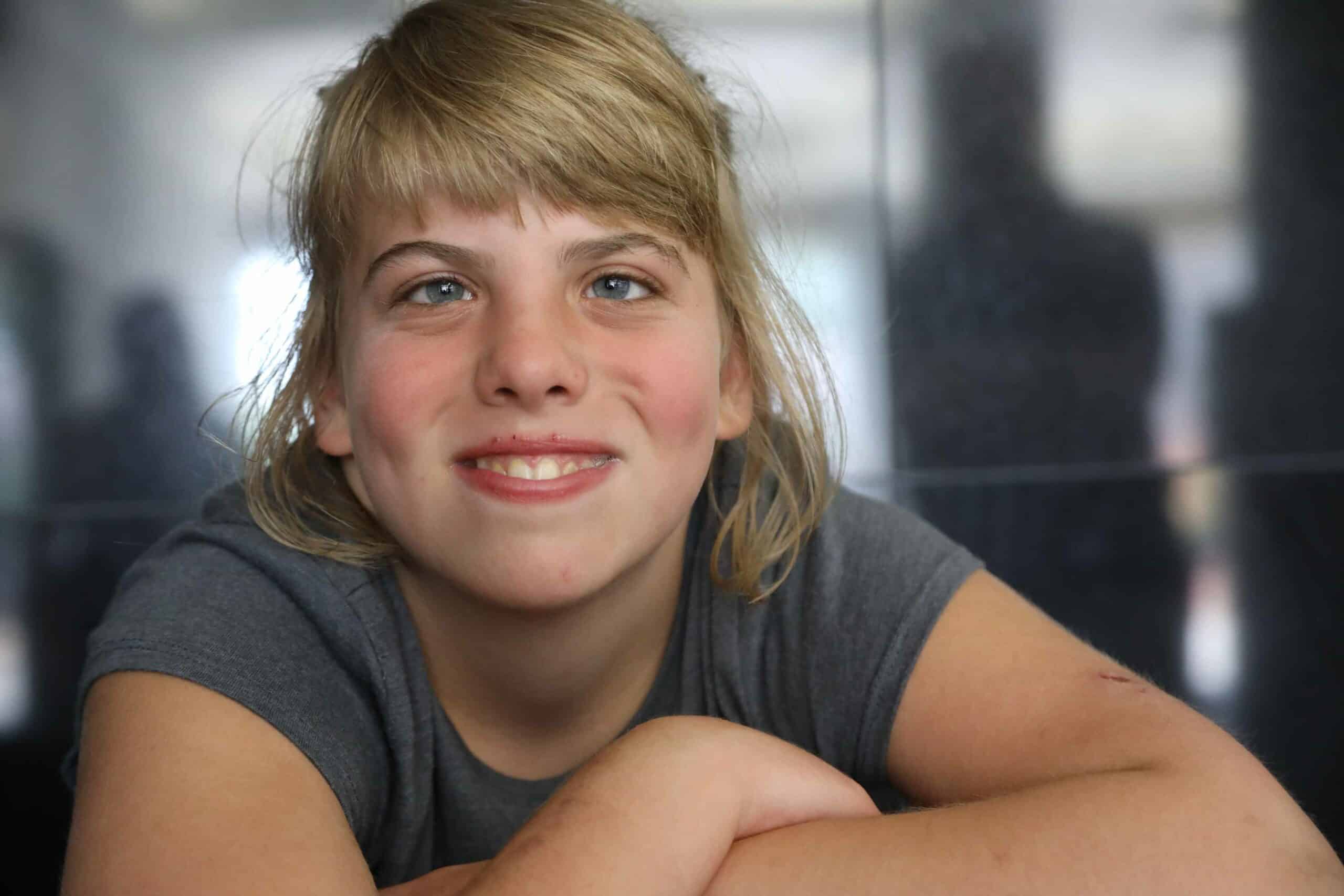 Smith-Lemli-Opitz syndrome is a genetic disorder that affects the development of children both before and after birth.

The syndrome was first described in 1964 in three boys with poor growth, developmental delays, and a common pattern of congenital malformations, including cleft palate, genital malformations, and polydactyly (extra fingers and toes). Initially referred to as the “RSH syndrome” after the initials of the first three patients, the syndrome is now better known by the last names of the three geneticists who first described it – Smith-Lemli-Opitz syndrome (SLOS).

Although SLOS had been known as a genetic disorder, the cause was determined until 1993, when scientists and clinicians discovered that children with SLOS are unable to produce sufficient amounts of cholesterol, an essential nutrient for proper growth and development.

It is unclear how much cholesterol may be passed from mother to fetus during pregnancy, however, unlike other nutrients or molecules essential for fetal development, the mother cannot supply sufficient cholesterol to the developing baby with SLOS.

The discovery of abnormal cholesterol metabolism in SLOS has been made possible by the development of a laboratory test for diagnosis and served as a rationale for potential treatment.

The chemistry of SLOS

In 1993, scientists made the important discovery that children with SLOS have an inborn error of metabolism that prevents them from making cholesterol in amounts sufficient for normal growth and development.

The deficiency of cholesterol, an essential building block of all cell membranes and the white matter of the brain, is caused by abnormally low functional levels of the enzyme 7-dehydrocholesterol reductase (DHCR7), which converts 7-DHC into cholesterol.

Children with SLOS who have the lowest cholesterol levels tend to have the most severe forms of the disorder, and those with major internal issues often die at birth or in their early years. However, with proper diagnosis and treatment, many with SLOS live well into adulthood. 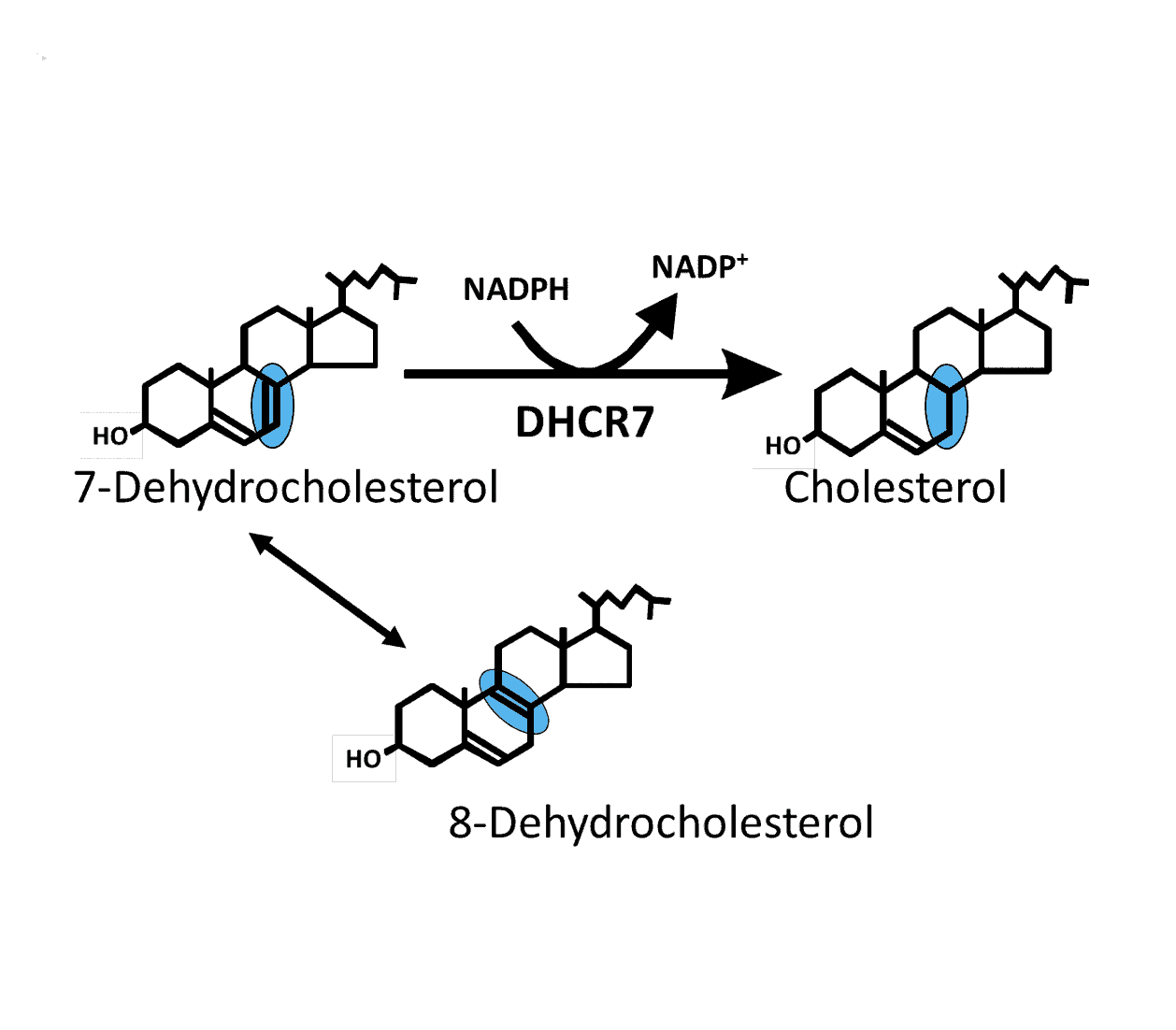 In most cases, but not all, a standard blood cholesterol test will show low cholesterol levels for individuals with SLOS. However, to confirm the diagnosis of SLOS, another blood test is needed.

This test is called the 7-DHC test or sterol profile.
A sterol profile uses sophisticated instrumentation to measure cholesterol, 7-DHC, 8-DHC, and a number of other sterols. The elevated level of 7-DHC confirms the diagnosis of SLOS.

There are a few conditions associated with 7-DHC elevations, although those conditions generally have different clinical features. In addition, after biochemical testing, molecular testing (a.k.a. DNA mutation testing or sequencing) is indicated to confirm the diagnosis and allow the identification of carriers within a family.

In addition to intellectual disability and developmental delay, many different malformations have been described in SLOS. The most common physical defects are listed below.

Some children will have only one or two minor malformations, such as webbing of the toes and cleft soft palate, whereas others will have almost all of the defects listed above. Because of the possibility of internal malformations, patients with SLOS should be evaluated carefully, especially for heart and kidney defects. Often, children with SLOS resemble one another more than they do others in their families.

Visit the Human Phenotype Ontology (HPO) website to review the different phenotypic abnormalities associated with disorders. Click on the link below to view the HPO Smith-Lemli-Opitz Syndrome page. 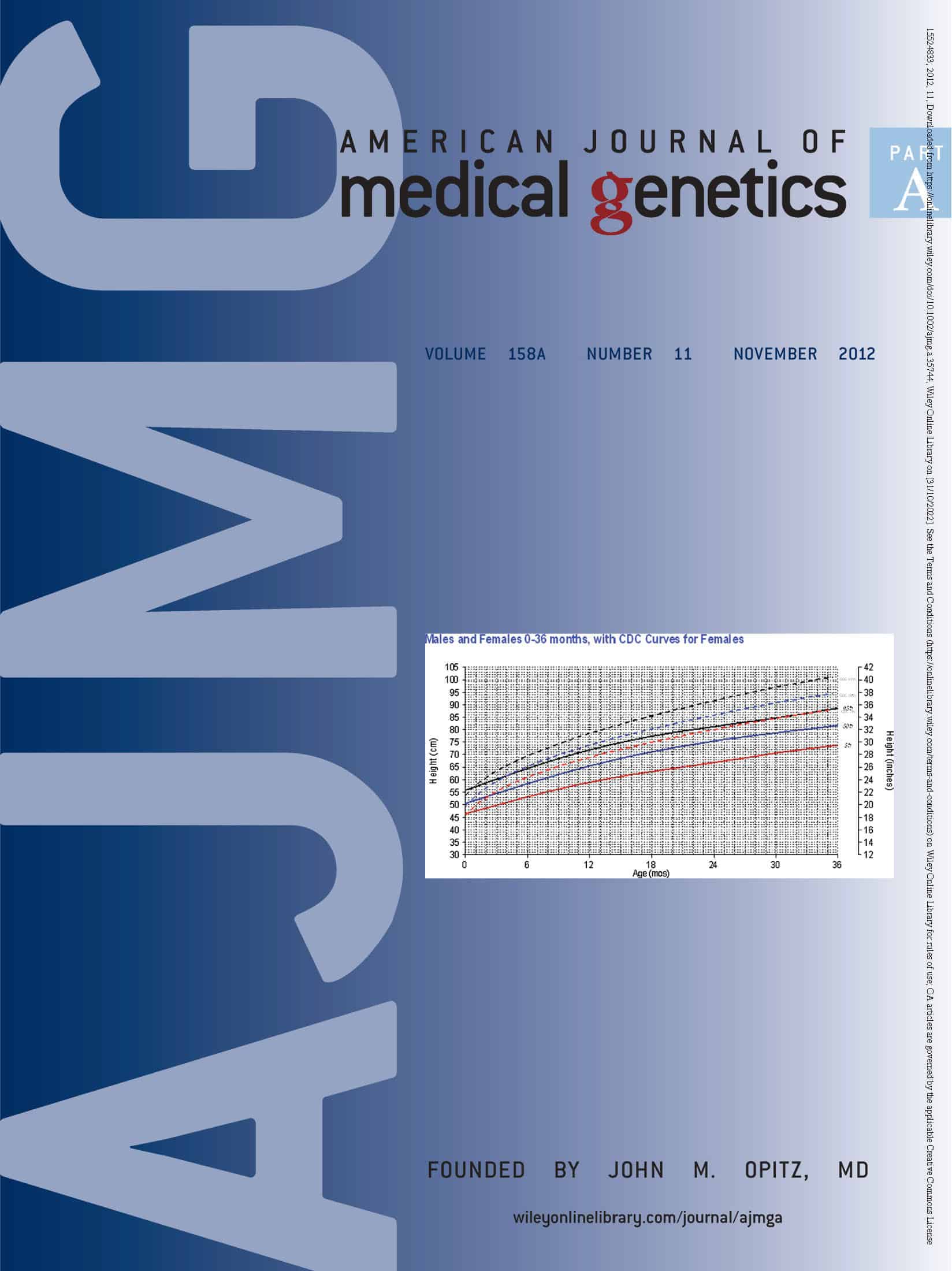 Growing and living with SLOS

Growth and development of children with SLOS can be delayed and affected by the spectrum of disease severity, with decreased weight and final height.

Medical specialists have developed growth charts to improve the care of individuals with SLOS.

With exception to the extremes of growth, there is limited evidence to suggest that failure to attain optimal growth, in mild to moderate degrees, leads to damaging consequences for the individual. Just like with the normal growth curves, a crossing of percentiles can be a sign of an intercurrent illness.

Many of our families download and bring the SLOS growth charts to their pediatricians to help them understand the decreased growth of our children.

Smith-Lemli-Opitz syndrome of all degrees of severity is inherited as an autosomal recessive disorder, like cystic fibrosis and sickle cell disease.

Following the discovery of the gene mutation on the long arm of chromosome 11, molecular testing or DNA testing is now available to aid in carrier determination and future pregnancy testing.

SLOS is one of the most common autosomal recessive disorders. Estimates of the incidence vary, but most studies in Europe, the United States, and Canada have found an incidence of 1 in 20,000 births. In some regions, the disorder may occur as often as 1 in 10,000 births. 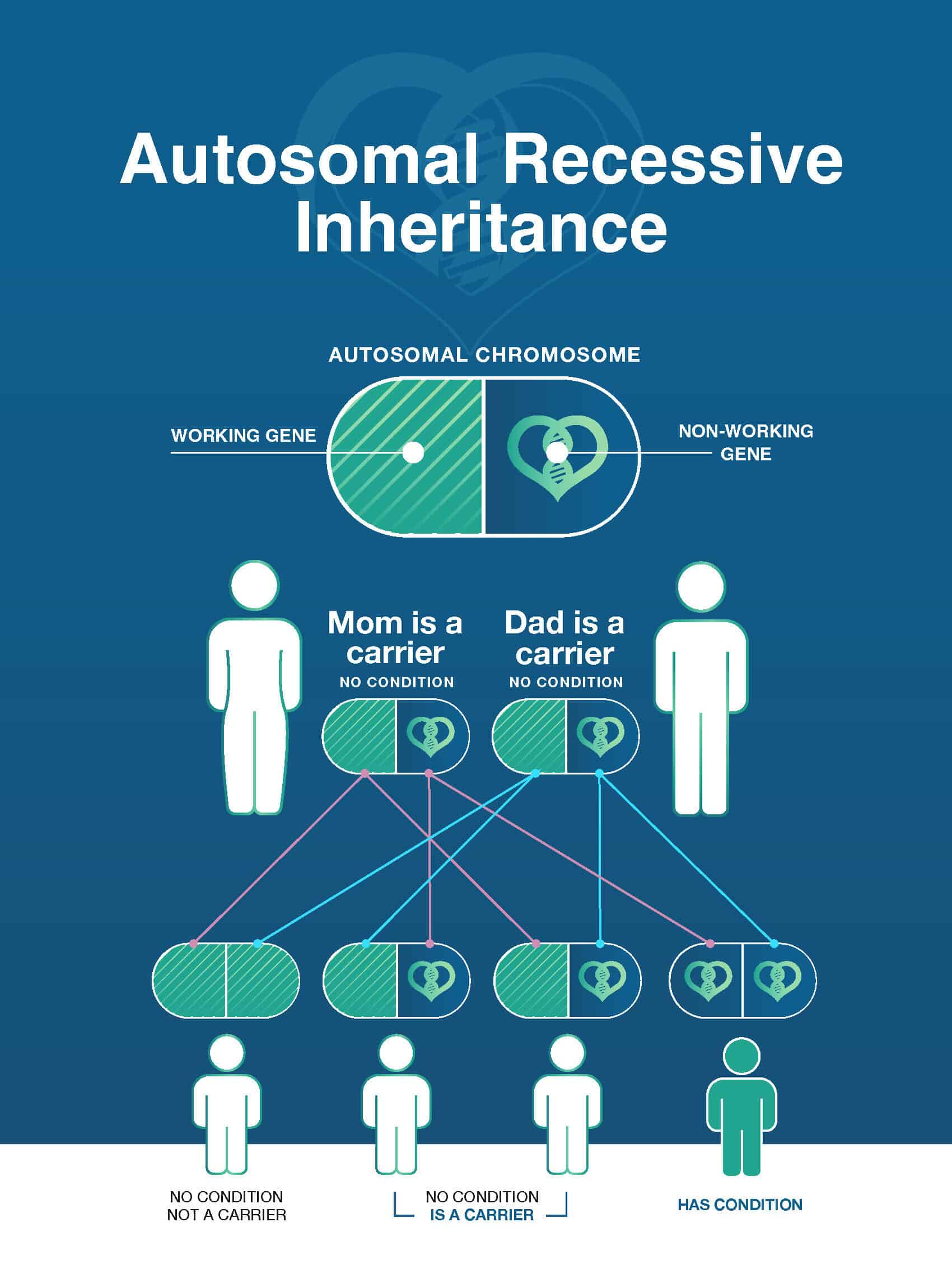 Certain behaviors and attributes are common in SLOS patients. Read about these in the drop-down table.

Other causes of poor growth may be internal malformations such as heart and kidney defects, Hirschsprung disease, or, more rarely, chronic liver disease.

However, even children who are vigorous and feed well do not grow normally and tend to be small as children and adults.

Many SLOS children have severe sleep disorders, some requiring medication. Lack of sleep can increase irritability, lack of focus and behavioral issues; therefore, it may be necessary for families to consult with a sleep specialist to help improve the child’s quality of sleep.

For those with severely delayed speech, frustration comes easily, and screaming or tantrums are often an outlet. Many patients show aggressiveness and self-injurious behaviors, including biting, hitting, scratching, or more seriously, head banging. In up to 75% of cases, a secondary diagnosis of autism is made. Given the frequency of behavior issues and overall hypersensitivity, it is highly recommended that families consult with a behavioral specialist on an ongoing basis.

Almost all SLOS children are born with minor anatomical variations in brain structure and have various degrees of slow development and intellectual disability. Although not all children with SLOS learn to walk and talk, many acquire good communication (often with the help of electronic devices) and can learn daily living skills. Independent living as adults, however, is unlikely.

Recurrent infections, including ear infections and pneumonia, are common.

The major medical problems of children with SLOS are in the areas of feeding, growth, and development. In addition, there may be other serious medical problems caused by one or more malformations, such as heart or kidney defects. The care of these problems often requires the combined efforts of geneticists and specialists.

Even for more mildly affected children, feeding problems are common and require careful management. Special attention must be paid to the frequent problem of limited formula tolerance because of the prevalence of functionally small stomachs and poor gastrointestinal motility in children with SLOS. Some patients with SLOS have feeding problems severe enough to require the placement of feeding tubes.

Consultation with a registered dietician may be necessary, and the use of special formulas is often helpful. It is also important to recognize that children with SLOS have a limited potential for growth.

A special SLOS growth chart has been developed and can be downloaded here: SLOS Growth Charts

Pyloric stenosis, caused by a thickening and spasm of the stomach outlet, is also common in the first weeks or months and often requires surgical correction.
Severe liver disease is a rare problem in some of the most severely affected children and may require treatment with special medications.

Click the tabs below to read about these treatments.

With the discovery that SLOS is caused by a metabolic error in cholesterol production, dietary cholesterol supplementation has been proposed as an intervention since the 1990s.

More clinical studies are needed to determine the benefits and possible risks of cholesterol supplementation as an intervention.

A trial using antioxidant supplementation was started in 2008, following studies in an SLOS animal model which showed that abnormalities in eye function could be improved with antioxidant treatment.

It was then discovered that the precursors 7-DHC and 8-DHC are “oxidized” and turned into substances called oxysterols which are toxic to the brain and the eye. A research protocol was developed to give antioxidants in the form of vitamins, in hopes of reducing the formation of oxysterols and thus protecting the brain and eye from oxysterol toxic side effects.

So far there have been no negative side effects of the vitamins and some improvements in special vision tests have been noted, but further studies are needed to determine the overall efficacy of this treatment as a therapy.

Bile acids are made from cholesterol, so a patient with very low cholesterol levels cannot make a sufficient amount of bile acids. Therefore, patients with severe SLOS have a bile acid deficiency.

Bile acids are essential for the absorption of nutrients in the intestines, particularly fats and fat-soluble vitamins. Without sufficient bile acids present in the gut, patients cannot properly absorb cholesterol and other nutrients.

Bile acids (including one called cholic acid) were used in the early 1990s to treat patients with SLOS. The bile acids were tolerated well and seemed to help cholesterol levels improve on treatment. But in the late 1990s, cholic acid stopped being manufactured and was not available until recently.

A new pharmaceutical company is manufacturing cholic acid again, called Cholbam, making it available for patients with SLOS. A pilot study was conducted at Children’s Hospital Colorado, and cholic acid was well tolerated and had minimal side effects. There was a modest improvement in cholesterol and precursor levels in the short study time. 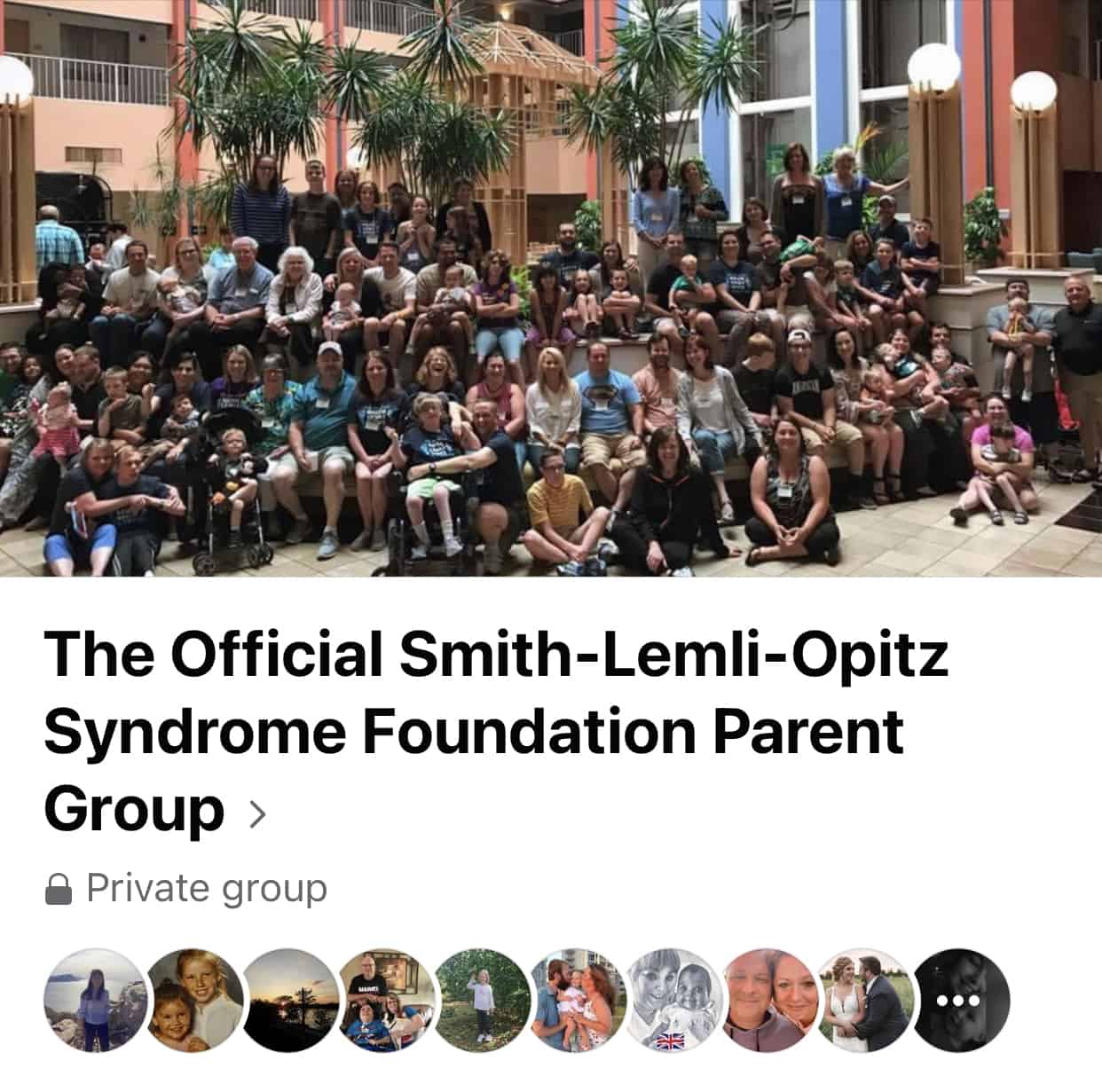 A private forum for Parents (only) of individuals with Smith-Lemli-Opitz syndrome to provide support and information for other parents. We review each request to join the group and reserve the right to deny entry into the group.

To be considered as a member of this Facebook group:

Be a Member Today!

Support us today by donating!
Be a member of our resource and support network by registering for a free lifetime membership!
DONATE BE A MEMBER

We work worldwide to improve the quality of life for people with Smith-Lemli-Opitz syndrome through educating and supporting families, spreading SLOS awareness, and funding research into the disorder.

The Smith-Lemli-Opitz Foundation is a registered charitable organization. Donations are tax-exempt under IRS 501(c)(3), ID #23-2635206.